One thing I learned from sitting in traffic is that nothing ever happens. Yup, exactly, hours of ‘nothing ever happens’. Thousands of people staring into their phones, waiting for the lights to change.
On this particular day, however, God prepared something very special for me, I met Reggie.
You know that awkward moment at the stoplight when a man or woman in need walks by your window asking for some pocket change and you start anxiously pretending to be looking at your phone? That’s how I met Reggie.
He approached my car with his tiny jar looking for change, I reached into my wallet to see if I had any, and all I could find was a $20 bill. “That’s too much for him”, I thought. At this time, as he was close enough to me so that I could see his face. I was stunned! I have never seen anything like that before. His face was disfigured from burn marks and his speech was affected.
I didn’t feel any fear or pity, I just remember having a very clear thought that this man needs the $20 bill in my wallet way more than I did. The man said ‘thank you’, and kept going.
Have you ever met someone with a story? This man had a story, and I decided I wanted to learn it.
As he was walking away, I said:
What’s your name?
Reggie, he said.
What happened to you, Reggie? Considering his looks, I thought that’s a questions he’s been asked many times before.
I was in a fire.
Did your house catch on fire?
No, I set myself on fire…
I was stunned. Why would anyone set themselves on fire? I could squeeze a word out for some time. The light was about to change, but I was determined to find out more. I asked Reggie if I could come back to hear his story, and he kindly agreed.
I was back on Reggie’s corner 2 days later. In the next 8 minutes you’ll hear his story. This accidental encounter has brought a lot of positivity in my life. I only ask that you pay close attention to what he’s got to say. His current attitude towards life, driven by the conclusions he made through his difficult times, is just as important as the journey itself.
We honk at other cars in traffic, we cuss at slow drivers, we are so angry and impatient all the time. And then, there’s Reggie. He carries the burden and pain of his prior mistakes, and yet there’s not a glimpse of negativity. Reggie isn’t blaming anyone, he isn’t out for revenge or justice. Reggie is, for me, a refreshing reminder to be grateful and aware of all the beautiful people and precious moments in our lives. He also reminded me that there is always more to someone than what appears on the surface. We’re too quick to judge, to place a label and dismiss, to hide our faces in our phones to avoid eye contact.
So, my friend, stop for a moment and listen. After all, you might be sitting in traffic right now, and someone with a story like Reggie’s could be walking past you.

Reggie from The Film House on Vimeo. 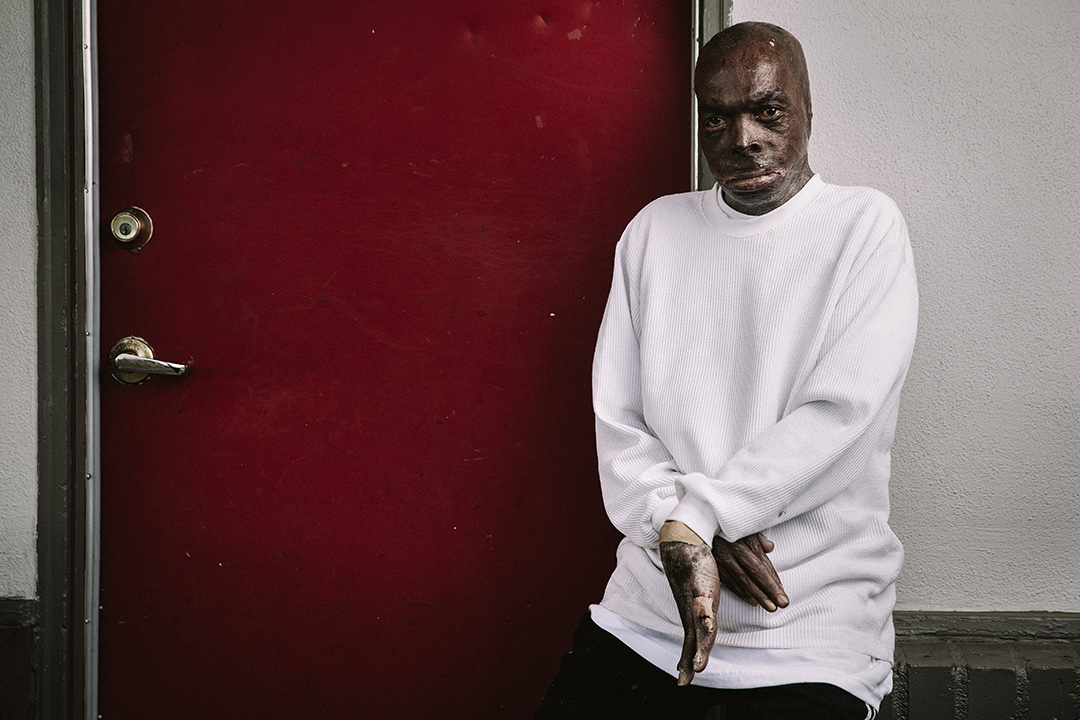 Elaine Saghafian
Hi Christopher, your dad sat down this morning at Mimi’s cafe with my daughter and me. I saw him a couple weeks ago for the first time on that street median. I usually don’t give money to people, as i’m by no means wealthy myself. But as a healthcare worker my heart went out to him, as i immediately recognized he was a burn victim. And he said to me “sorry to bother you and my name’s Reggie”. What a sweetheart! Never ever has someone apologized to me and actually introduced themself! I told my daughter and friends about him when i got home and wondered about his story. I was so glad to see him at Mimi’s and hear how he says he’s a changed man. I feel blessed to have got to know him a bit, and wish him and you lots of love and peace in life ❤️🙏.love from Elaine
Reply

amy
What a beautiful story!!!! God bless you Reggie!!!!
Reply
Herbert Jarome Cantrell
I believe you were is the service when this happened.
Reply
bernardo
that guy is one of my good friend of my thats for making this video
Reply
Beignets Donuts
Reggie is a my buddy. He would call me his wife and give my kids money each time he saw us for doing good in school. Yes I give him money because what employer will hire him, plus his arms are brittle due to poor blood circulation. To the young woman that said he dressed nice. Just because you are burned doesn't mean you dress poor. He doesn't live in a lavish home. He lives in a 1 bedroom apartment in a low income area. He is not homeless, he is burned. Therefore he hss a right to dress nice. Furthermore maybe someone-blblessed him with the gokd chains as a gift.
Reply
keshawn sessomz
This man can wear nice clothes he may also recieve a disability check but I kno he needs to panhandle. If you see Reggie looking nice or driving a Lexus that means he's not wasting your money on drugs and booze. People act as if they want him to not put his money to good use. Its not like he can work or anything. Hopefully he gets a documentary deal or even sell his story for film or a book. This was inspirational
Reply
Sarah
Thank you for bringing light to this man's story. I hope that it reminds people to be thankful for all that they have. I don't think I'll ever drive past Reggie again without giving him whatever I can... even if it's just a kind word.
Reply
kaikai
Amazing! When I use to live in that area I seen him all the time. My daughter use to ask mom what happened to him? Now I'm able to share his story with her. In hopes of her understanding to extend her heart to those that are less fortunate because you never know their story.
Reply
desiraye
I remembered when I was a little girl and stayed in the manors I use to see him often. I didnt know any better so I stared a lot. Than and day someone told me he burnt him self purposely I think it was over a woman. But I thought they were rumores. Im happy to see he is still here.
Reply
kKathleen H
Thank you for sharing Reggie's story. I give to him all the time but never knew his story or his journey.
Reply
BSly
Thank you for sharing this..I'm a tough guy..but I had to stop the video twice..
Reply
Elizabeth
It amazes me how judgmental people are, really because your burned you can't have decent things?!? If you choose to give someone spare change do it out of kindness and genuinely. Come on, it's not like any of you are giving him your paycheck. It's up to him and his conscious what he does with it. Be the change you want to see in others.
Reply
Anna Padilla
This is amazing!!! Thank you so much for doing this.
Reply
Tanisha
I have no words. He said it very simply live life and we need to all be friend.
Reply
Gina
God bless him. Beautiful story. Very wise and beautiful message he gives. Beautiful person, beautiful child of God. He always blesses you whenever you stop at the light. God bless you Reggie. Thanks for posting his story. I was one of those that whenever I had no cash I would just smile at him or looked away embarrassed for not being able to help. But I believe a simile or a God bless you would have been just as good for him.
Reply
james adger
I've run into this guy several times. One of my co-worlers seen him several years ago at best Buy there by where he is on Howe. Said it was during the holidays buying a flat screen tv. I believe his story but some of these comments i see of him being rude is a fact cause he said Jeff you to me as i sat in my car, doing the same ting looking straight. hope the best for him but these people you have to watch out for. not as genuine as they may seem. Just saying
Reply
Jennifer
That's right Crystal, who are you? I worked at Chilis over a year and saw him on a daily basis. He has been through more than we can imagine and he still has a better outlook on life than most people I know. Reggie is an inspiration to those he meets. He reminds people how precious life is and because God gave him a second chance, he is using that to not only better his self but share his story so that he may help some one else heading down the wrong path
Reply
Nisha
can someone please tell me where I can find him. I would like to help.
Reply