Reggie and I have known each other for over 2 years now. During this time we’ve grown closer. We’ve become friends, and to my astonishment, he seems to like hanging out with me. What’s not surprising, given Reggie’s infectious personality and humble attitude, is that I really enjoy spending time with him. Learning about his life has been a humbling experience.

This year, Reggie turned 60. I wanted to do something special for him, but I wasn’t quite sure what that should be.

One of the things I learned about Reggie is his love for the San Francisco Giants. What Reggie didn’t know at the time, is that I had spent some time with the SF Giants star, Barry Zito, during our humanitarian trip to Haiti last year. I got a chance to share Reggie’s story with Barry, who has been committed to helping veterans throughout his MLB career. Reggie’s story resonated with him, similarly to you and I, and Barry shared it with SF Giants Headquarters. Shortly after, Reggie was invited to a SF Giants game where, traditionally, local charities are recognized. I flew out to Sacramento, picked Reggie up, and spent some quality time during our road trip down to San Francisco.

At the game, Reggie was asked to come down to the field. I wish you could see Reggie’s face when Larry Baer, the SF Giants CEO, came down to shake his hand and introduce himself. I cannot imagine a bigger joy for a true fan than spending time with your favorite team, in their ‘house’, with their CEO by your side. HOMERUN! (sorry)

Such experiences make up the best memories, and I’m grateful to Barry and SF Giants organization – especially Bobby Baksa for their initiative and love shown to Reggie. 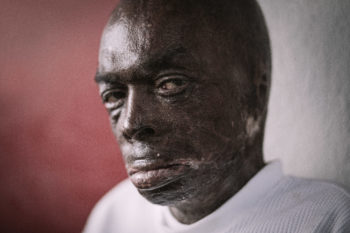